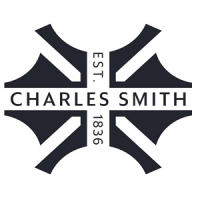 G Lincoln Smith & Sons. (aka Charles Smith Leather Co) was established in Nottingham, England in 1836, during the industrial revolution era. Leathercraft was very important as the material was used extensively, because of its enduring properties, for many purposes.

G Lincoln Smith & Sons was formed in answer to the demand. The business remained intact right through the war years at its premises in Granville Works, Birmingham. With the uses of leather changing Charles Smith Leather Co utilised both its knowledge and skills in the immediate area to commence manufacturing

Fine Leather Goods such as wallets. The company largely remained unknown as they did not have a High Street brand as such, but instead manufactured on behalf of other companies.

Then came the emergence of the likes of China as an industrial powerhouse and a shift in choice of careers for the British workforce.

Charles Smith Leather company continued to trade right up to 2006 and what remained was knowledge, skills and passion. All of which lives on! Oxford Leathercraft acquired the company in 2006 and set to work to revitalise the brand and product collections.

Today the brand features more prominently on the High Street than ever before; the hard work of the original founders has paid off!